Why we give: Drs. Najam Mian and Kshitij Chawla 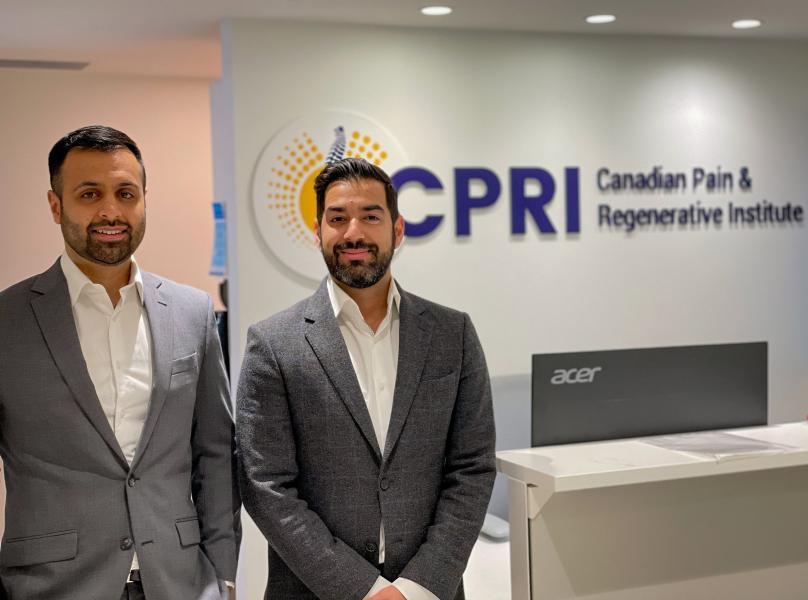 Drs. Najam Mian and Kshitij Chawla are physiatrists and pain medicine specialists who, in addition to co-founding the Canadian Pain & Regenerative Institute, dedicate their time to supporting Pain BC’s mission. Najam is the Clinical Hub Team Lead for Pain BC’s BC ECHO for Chronic Pain and Kshitij is a member of the Pain BC Board.

Both are also monthly donors to Pain BC because the say they value the organization’s support services for people in pain, educational programs for health care providers, and its advocacy efforts to raise the profile of pain in BC and across Canada.

“As doctors, we provide medical care, but we know there are many other needs for support once patients leave our offices,” Kshitij says. “The majority of the time, they’re living with chronic pain alone or with limited support and understanding of their condition, and a lot of these gaps are filled by Pain BC’s support services programs.”

“We want to support Pain BC programs as much as possible, whether it’s the fantastic self-management and educational resources that are available to patients or the clinical education programs available to health care providers,” Najam says. “We want to help sustain and expand these programs down the road so more people can benefit from them.”

Kshitij first heard about Pain BC while completing his fellowship in Ottawa. “In our multidisciplinary program, we used a lot of Pain BC resources and I was really impressed because we didn’t have a similar body of advocacy for pain in other provinces where I trained,” Kshitij says. “I was a big fan of how much Pain BC was offering on pain education and self-management.”

“I first found out about Pain BC at the Provincial Pain Summit in February 2017,” Najam says. “As a recent graduate of physiatry and starting my pain medicine training, I was so impressed by how many key stakeholders Pain BC was able to bring together, including health care providers, administrators, government, and patients, all with the common goal of improving care for patients with pain.”

“Unfortunately, there’s a lot of stigma [among health care providers] around treating patients with chronic pain,” Najam says. “Part of this traces back to minimal exposure to chronic pain in traditional medical education. I hope that, with the clinical education programs offered by Pain BC, health care providers can break free from the stigma and open themselves up to trying to help patients as much as possible.”

“Pain is such an invisible disease and, well, it’s not even recognized as a disease for the most part,” Kshitij says. “We see that at all levels of care, because there’s no test or picture for it, it falls through the cracks between all the other very visible diseases like cancer, Alzheimer’s or heart disease, which have so much advocacy behind them. So I think it’s everyone’s responsibility, including ours, to raise awareness of this disease that’s so common and disabling.”

We’re incredibly grateful for the leadership and generosity Najam and Kshitij exemplify through their ongoing commitments to Pain BC. Learn more about how you, too, can support our work by becoming a donor today.